Schistosomiasis, a disease that is common in sub-Saharan Africa, is particularly widespread in Madagascar. The Schistosoma mansoni parasite responsible for the disease is linked to fibrotic changes in the liver which can be detected using point-of-care ultrasound. Dr. Hannah Russell described how point-of-care ultrasound was put to the test in remote locations during an expedition to study the disease in Malagasy school children.

My interest in Schistosomiasis – also known as Bilharzia – and the Madagascar project began when I was a medical student, after meeting fellow student – now doctor – Stephen Spencer. He became interested in schistosomiasis during a placement in Egypt, and realised that there was little in the way of up-to-date research on the disease in parts of Madagascar.

Stephen asked me and two other students to join him in a research study investigating schistosomiasis in school children living in remote rural areas of the country. Planning the expedition was hard work and took a long time, but we managed to secure funding from several different bodies to complement our own personal contributions, eventually setting off to Madagascar for the first phase of the study in 2015.

Our aim was to measure the prevalence of schistosomiasis in school children aged between five and 14 years – a group that it was feasible to enlist in sufficient numbers – living in six villages located alongside the Nosivolo river in the Marolambo District, an area south of the capital, Antananarivo.

After landing in Antananarivo, we spent four days travelling overland to the capital of the district, the town of Marolambo, and then a further day to reach the first of the six villages. From there, we trekked along the Nosivolo River, stopping at each village to collect urine and stool samples, and examining them for the eggs of the parasite. We discovered that the area had an almost unheard of proportion of children (97%) infected with the parasites, and this led to a follow-up expedition to investigate the morbidity associated with the disease.

During my final year medical elective, I had become absolutely fascinated with point-of-care ultrasound and its potential applications. We had the idea of using it to look into the morbidity associated with schistosomiasis, complementing other information obtained through questionnaires about disease symptoms, cardiovascular fitness tests, and a fingerprick test for anaemia.

We based our research on the WHO recommendations for using ultrasound to investigate schistosomiasis, which included looking at the echogenicity of the liver, periportal fibrosis and the diameter of the portal vein.

However, using large cart-based instruments in remote villages accessible only on foot is just not feasible; we needed a portable ultrasound system. We contacted FUJIFILM Sonosite, explaining what we were doing and why, and the company lent us an Sonosite iViz system for the project, which was ideal as its light weight and small size made it easy to carry around in a kit bag. Another consideration before we left for Madagascar was how to recharge the system’s batteries. We knew that we would not have access to power during the trip, and so we contacted a gentleman from Mobile Solar Chargers Ltd who had experience of using this technology in developing countries. He was very excited by what we were doing and kindly made some solar panels that could be used. We took six batteries with us, which allowed us to work right through the day, and then we recharged them overnight from the power generated by the solar panels.

We performed all the ultrasound examinations in the school huts, and found the villagers to be unbelievably welcoming of our team, consisting of Stephen Spencer, James Penney, Cortland Linder and myself. Initially, the children were very unsure what to make of it all, but once one child had put themselves forward and we had made it into a bit of a game with the jelly, saying “Oh, it's really cold”, they all had a bit of a giggle. After a few of them had been scanned, the rest jumped at the opportunity. With every person we scanned, we rotated the screen to show the image to the children, and their faces just lit up. They were really intrigued, climbing over each other to see the screen.

Given the age group of the study cohort, we did not anticipate a huge incidence of fibrotic changes, but there were definitely a few children whose scans were not quite what you would expect in a healthy individual. The iViz lets you record videos. We came home with footage from about 300 children, which we are currently reviewing to determine any correlation between parameters such as height, weight and age, as well as doing statistical analysis of the results. We look forward to completing the analysis of the data and publishing the results. 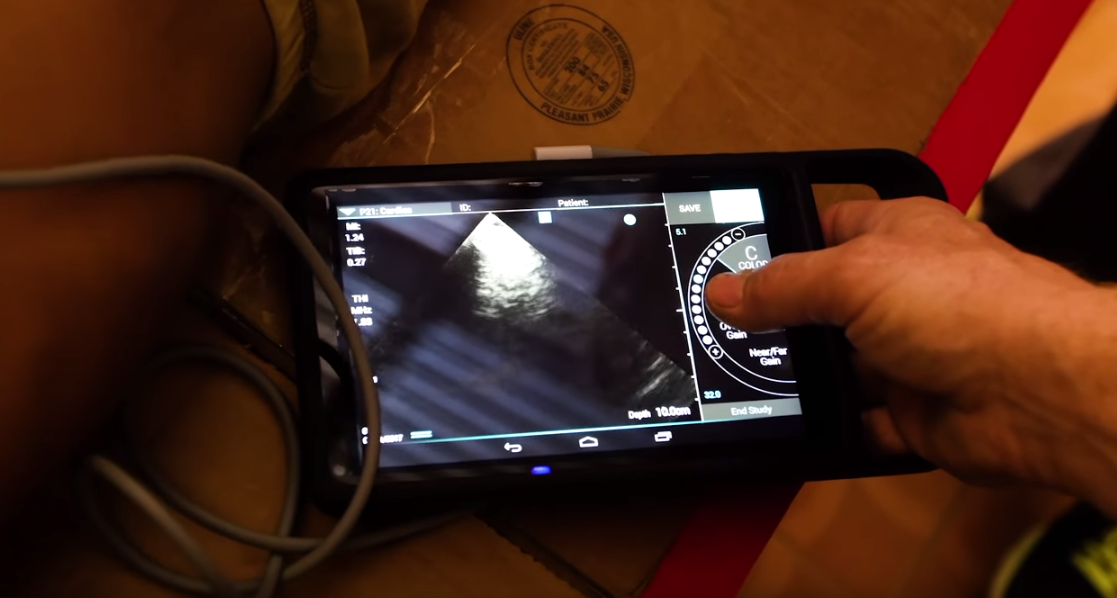 What Do Emergency Physicians Think About the Sonosite iViz?

Ultrasound Guy Gives Back to Jamaica with Sonosite’s Help END_OF_DOCUMENT_TOKEN_TO_BE_REPLACED