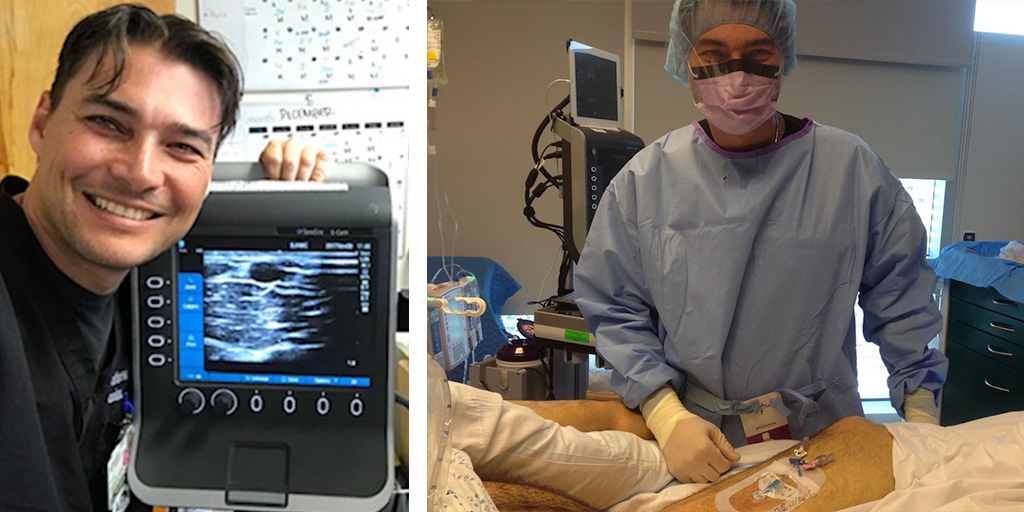 After spending six years as a New York City 911 paramedic, I became extremely skilled at peripheral IV insertion. During my second year as a registered nurse, our ultrasound director Dr. Brett Nelson began training residents on POCUS, and allowed me to train on ultrasound-guided PIV placement. At this initial stage, we were accessing the brachial vein in the antecubital region of the arm. A few years later, vascular access specialists began to scan the forearm. I was made aware of vascular access teams, and took a PICC insertion course. I left the emergency department to help start a new vascular access program at Methodist Hospital in Brooklyn. It wasn't until I developed my third vascular program at St. Joseph’s that I would turn our focus from PICC line insertions to ultrasound-guided peripheral IVs. Then I explored using the ultrasound as a "tracker" to provide subcutaneous tunneling with PICC lines. And finally, I used POCUS to develop a new bedside central line insertion site with Dr. Mourad Ismail using the femoral vein in the mid-thigh, establishing a new standard of care in vascular access.

With vascular access, patients can be given medications, tests can be administered, and lab values can be monitored. But obtaining vascular access has always been a challenge for healthcare workers. Once clinicians see how POCUS facilitates vascular access, their desire to learn and implement are overwhelming. There is not a day that goes by where we do not have a visitor at the hospital to observe our practice. One of my most satisfying moments was our anesthesia department’s positive reaction to our grand rounds lecture about using ultrasound to access the axillary vein in the deltopectoral groove instead of a blind subclavian vein insertion.

In one case, we had a patient who was pulling out all of his lines, but required long term vascular access to be discharged from the hospital. I had the idea of tunneling a catheter to his back from his jugular vein. I was able to scan the left jugular vein, assessing the path to the back with the ultrasound to assess for collateral vessels in the path. We were able to provide tunneled catheter from the back to the jugular vein at the bedside with a navigation system confirming our placement—without fluoroscopy.

In another case, a two-month-old infant diagnosed in-utero with Pompe disease was brought to me when the staff could no longer obtain vascular access. The patient required ten tubes of blood to be drawn and infusions every two weeks. At first, I thought of recommending a tunneled catheter for the patient, but I scanned the forearm of the infant and located a small cephalic vein in the forearm. From there, I was alternating between the left and right forearm with a long 24-gauge peripheral IV under ultrasound guidance. This patient is the first documented patient to be cured of Pompe disease from intrauterine diagnosis. The only reason this access site remained healthy is because the ultrasound guidance prevented the needle from hitting the back wall of the vessel, minimizing trauma during insertion. Ultrasound guidance has completely revolutionized the options we can provide our patients. Our oncologists are removing patients’ port-a-caths because we can now obtain their blood and provide their infusions with ultrasound.